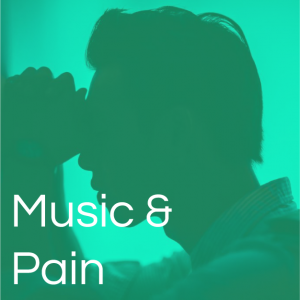 Music listening has been shown to alleviate pain. Thus, it would appear to be a promising means of symptom reduction and health promotion, given that it is an activity of daily life that is popular, cost-effective and easily accessible. However, the mechanisms underlying its potential pain-reducing effect remain to be elucidated. We posit that the pain-reducing effect of music is mediated by a reduction in the activity of stress-responsive systems in the body.

Music listening is associated with reduced subjective stress levels and affects physiological markers of stress (Pelletier, 2004; Chanda and Levitin, 2013; Koelsch, 2014). Koelsch (2014) proposes a model of music-evoked emotions in which music is initially processed in the central nervous system, then further impacts endocrine, autonomic and immune activity, and leads to the experience of a broad range of emotions. A stress-reducing effect of music listening may be explained by music particularly affecting activity in the hippocampal formation, which in turn influences the activity of the hypothalamus–pituitary–adrenal (HPA) axis (Koelsch, 2014). The HPA axis constitutes one of the major stress-responsive systems in the body, and its activation leads to the secretion of the steroid hormone cortisol (Hellhammer et al., 2009). Research has linked music listening to a down-regulation of HPA axis activity, as mirrored in lower concentrations of cortisol (Chanda and Levitin, 2013). This has led to the conclusion that the health-beneficial effect of music listening is mediated by a reduction in stress (Thoma and Nater, 2011). Another stress-responsive system of high relevance is the autonomic nervous system (ANS). Music listening has also been associated with a down-regulation of ANS activity, which is reflected by both lower blood pressure and lower heart rate (Kreutz et al., 2012).

Interestingly, stress has been discussed as an etiological factor in the manifestation of chronic pain (Fitzcharles and Yunus, 2012), giving rise to the conclusion that music listening has the capacity to positively influence pain. Indeed, the term ‘audio-analgesia’ was coined in this context (Gardner and Licklider, 1959). Nevertheless, the exact mechanisms underlying the pain-reducing effect of music remain unclear. One open question concerns whether music listening can reduce pain per se (i.e., direct effect) or whether it facilitates coping with pain (i.e., indirect effect). Bernatzky et al. (2012) state that music exerts effects in the brain that directly impact on the relevant pain circuits, which in turn reduce the perception of pain intensity. However, the empirical evidence is not consistent in this regard, as there are also studies showing no music-induced reduction in perceived pain intensity (i.e., MacDonald et al., 2003). Similarly, Mitchell and MacDonald (2006) did not find a reduction in pain intensity, but did find an increase in control over pain, and thus propose that music listening is successful in reducing pain by specifically improving control over pain (Mitchell and MacDonald, 2012). While the exact mechanisms remain unclear, it has been discussed that improved control over pain may be achieved via distraction from pain or via induced relaxation (MacDonald et al., 2003; Mitchell and MacDonald, 2006; Mitchell et al., 2006).

When experiencing pain, information is forwarded from nociceptive receptors in the periphery of the body to cortical areas in the brain. Different brain mechanisms process information either serially or in parallel, with certain brain circuits being involved in the sensory-discriminative components of pain and others being involved in the affective-motivational components of pain (Treede et al., 1999). Research examining the neurobiological mechanisms underlying the pain-reducing effect of music identified the limbic system – which is involved in the affective-motivational modulation of pain – as a key structure in the brain that is affected by listening to music (Bernatzky et al., 2012). As the cortico-limbic pathways exert an inhibitory effect on pain, it is likely that music listening exerts a pain-reducing effect. At the same time, the limbic system, especially the hippocampal formation, is closely associated with the modulation of the HPA axis (Jankord and Herman, 2008). In this way, music listening is thought to exert a stress-reducing effect (Koelsch, 2014). Bernatzky et al. (2012, p. 270) state in this regard that a ‘hypothalamic changeover’ leads to music-induced distraction and relaxation in the context of pain. In other words, on a neurobiological level, music listening exerts effects in the central nervous system that are critical to the modulation of both pain and stress. The limbic system can be regarded as a key structure in this context, which further impacts on neuroendocrine and autonomic functioning.

However, most of the studies on music listening and pain are based on studies of acute pain in the clinical context. What remains understudied so far is the effect of music listening in chronic pain conditions (Finlay, 2014). In contrast to acute pain, which requires a pain stimulus to be present, the perception of pain in chronic pain occurs even though no current pain stimulus is present (Lee et al., 2011). This persistent experience of pain is explained by long-lasting alterations in both the central and the peripheral nervous system as nociceptive information transmission is impaired (Lee et al., 2011). Therefore, patients with chronic pain show an altered processing of sensory input, which could be linked to an effect on the limbic system (Bennett, 1999). Inhibitory effects of the thalamus on limbic structures seem to be impaired, thereby increasing the experience of pain (Bennett, 1999; Tracey and Mantyh, 2007). As chronic pain – in contrast to acute pain – is associated with these physiological alterations, it is of utmost importance to examine whether music listening can affect pain in chronic pain conditions as well.

Fibromyalgia syndrome (FMS) is a medically unexplained condition mainly characterized by chronic widespread pain impacting heavily on patients’ quality of life (Woltman et al., 2012). Stress seems to play a major role in the manifestation of pain symptoms in FMS patients: it was demonstrated that patients with FMS show alterations in HPA axis (Tak et al., 2011) as well as in ANS functioning (Martinez-Lavin, 2002). We previously investigated the role of both HPA axis and ANS in the relationship between stress and pain in daily life (Fischer et al., in revision). Hereby, we have shown that stress exacerbates pain in FMS patients, with HPA axis activity (but not ANS activity) being associated with pain. As music listening has been shown to reduce stress and stress system activity, the question arises whether music listening can also have a positive impact on pain in FMS patients. The still limited number of studies point toward a pain-reducing effect of music listening in these patients (Onieva-Zafra et al., 2013; Garza-Villarreal et al., 2014). In their experimental study, Garza-Villarreal et al. (2014) found pain-reducing effects, which they hypothesized to be due to cognitive and emotional processes, as music listening might have helped to distract from the pain and lead to a state of relaxation. However, the study was set in a highly artificial laboratory context, thus limiting the generalizability of its results. Onieva-Zafra et al. (2013) conducted an intervention study set in daily life, in which FMS patients were instructed to listen to pre-recorded music CDs almost daily for 14 consecutive days. Although music listening was associated with alleviated pain intensity levels, the underlying mechanisms remain unclear, as no biological markers were assessed in this study.

Taken together, the currently available literature suggests that music listening has pain- and stress-reducing effects. The underlying mechanisms, however, remain to be elucidated. Since most of the previous studies were set in experimental contexts examining acute pain, an investigation of the psycho-biological effects of music listening on chronic pain in daily life is warranted.

A total of 30 women meeting the Fibromyalgia Research Criteria (Wolfe et al., 2011; mean age = 50.7 ± 9.9 years, range: 27–64 years) were recruited via specialized clinics and various advertising outlets from the general population (i.e., newspapers, self-help groups, internet) as part of a bigger study on everyday life stress in patients with functional somatic symptoms. The eligibility criteria were as follows: diagnosis of fibromyalgia according to the Fibromyalgia Research Criteria, female sex (due to the majority of FMS patients being female, Wolfe et al., 1995), German as native language, age between 18 and 65 years, body mass index (BMI) in the range of 18–30, regular menstrual cycle or being post-menopausal, no acute or chronic unmedicated conditions influencing biological stress markers, no current pregnancy or breast-feeding, no lifetime psychotic or bipolar disorder, no eating disorder within the past five years, no substance abuse within the past two years, and no current episode of major depression. As compensation, participants received 80 Euro. The participants were informed about the aims of the study and gave written informed consent. The study was approved by the Ethics Committee of the Department of Psychology at the University of Marburg, Germany.

The study was designed as an ecological momentary assessment study (Shiffman et al., 2008). Participants were examined on 14 consecutive days. Initially, potential participants underwent a telephone-based interview in order to check the eligibility criteria. If they fulfilled the criteria, they received a detailed study description by post. Subsequently, participants were invited to the laboratory for an introductory session. For the duration of the study, patients received an iPod® touch (Apple, Cupertino, CA, USA), on which they were required to complete six daily assessments on each day by means of the software iDialogPad (G. Mutz, University of Cologne, Germany). The participants were instructed to switch on the iPod® upon waking up the following morning, not to turn it off from then on, and to recharge it every night. The assessment period began on the day following the introductory session. Each day, participants were asked to trigger the first assessment themselves directly after awakening. An activated timer prompted participants to complete a second set of questions 30 min afterwards (to determine the cortisol awakening response, which was not used in the current analyses). Further fixed assessments followed at 11.00, 14.00, 18.00, and 21.00 h. Participants were instructed to provide a saliva sample after each assessment for the later analysis of salivary cortisol and salivary alpha-amylase, for which they were provided with pre-labeled tubes. After completing the 14 days of assessment, the participants returned to the laboratory to hand over the saliva samples and iPod®. On this occasion, they also completed online-based questionnaires. Additionally, a post-monitoring interview was conducted, checking for problems in handling the iPod® or problems with the collection of saliva samples and asking for any unusual events during the measurement period.

PrevPrevious PostA systematic review of the effectiveness and cost-effectiveness of sensory, psychological and behavioural interventions for managing agitation in older adults with dementia
Next PostHow Music Can Influence the Body: Perspectives From Current ResearchNext