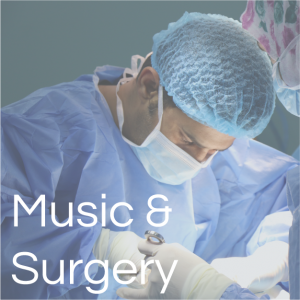 Music ‘just as effective’ as drugs for calming nerves before surgery

“Music has charms to sooth a savage breast,” the poet William Congreve said back in 1697.

We have long known about music’s soothing qualities, but researchers now claim it could be just as effective as drugs for calming patients.

A clinical trial in the US compared the levels of anxiety felt by patients who were prescribed the drug midazolam and others who were told to listen to music.

Those involved in the study were having a type of regional anaesthetic, or peripheral nerve block.

Researchers split 157 adults into two groups, with the first being given 1mg to 2mg of midazolam, which was injected three minutes before the peripheral nerve block.

The other group were given noise-cancelling headphones and listened to English band Marconi Union’s Weightless – which has been described as the “world’s most relaxing song”.

According to Forbes, the band collaborated with a therapist to produce the ultra-relaxing tune, which aims to lower the listener’s blood pressure, stress levels and heart rate.

Pre-operative anxiety is common and can raise levels of stress hormones in the body, affecting its ability to recover after surgery, according to a team from the University of Pennsylvania writing in the journal Regional Anesthesia and Pain Medicine.

The study scored patients’ levels of anxiety following the two treatments – and found participants who had listened to music were just as relaxed as those who were given the sedative.

However, patients in the drug group were happier with their overall experience, although this may have been because participants were not allowed to choose the music they listened to.

Both doctors and patients also thought it was easier to communicate without the music.

Following the study, the team said “music medicine” could be used as an alternative to midazolam before peripheral nerve block injections.

But they said “further studies are warranted to evaluate whether or not the type of music, as well as how it is delivered, offers advantages over midazolam that outweigh the increase in communication barriers”.

PrevPrevious Post1 in 6 Children in England Struggle with Mental Health Disorders
Next PostIs music a language?Next

Music ‘just as effective’ as drugs for calming nerves before surgery